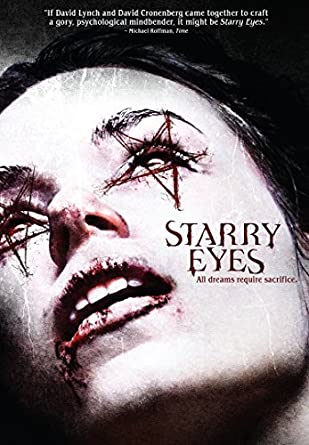 Check This Out – Starry Eyes, A Modern Horror Movie Classic

Would you give your soul for fame and fortune?

If you said “Yes!” then you might want to see Starry Eyes and reconsider that decision.

This gem of a horror flick from 2014 stars Alex Essoe as an aspiring actress who additions for a role that could potentially be the break she has been longing and working towards for years. But taking the role comes at a cost.

Going into Starry Eyes, I didn’t know anything about it. I saw a couple of reviews and saw it ticked off some boxes for me (smart, for fans of Rosemary’s Baby, occult stuff) so I went for it. The less you know about Starry Eyes, the better. Like I mentioned, I didn’t know much about it going in and that made it all the more better. After seeing countless horror movies, very few surprise me either in regards to storylines, twists, etc. But this one did in regards to the main character’s storyline. Typically, the protagonist in a story like this would go in one direction at a certain point but not this one. As a result, it added even more depth and characterization that isn’t normally found in horror movies.

Great direction, writing, and acting makes Starry Eyes a horror movie that has been in my favorites for years. Check it out!

Check This Out Recommendations